US Representative from New York

Former Representative Richard L. Hanna, a moderate Republican from upstate New York who was so disenchanted with Donald J. Trump in 2016 that he broke with his party and endorsed the Democrat Hillary Clinton for president, died on Sunday at a hospital near Utica, N.Y. He was 69. Mr. Hanna, who had built a successful construction business before his election to Congress in 2010, represented a sprawling district that stretched from Lake Ontario to the Pennsylvania border. After just three terms in Congress, he announced in December 2015 that he planned to retire, saying he wanted to spend more time with his wife and young children. His wife, Kim; a son, Emerson; and a daughter, Grace, survive him. He lived in the Oneida County hamlet of Barneveld, about 14 miles north of Utica. A Representative from New York; born in Utica, Oneida County, N.Y., January 25, 1951; graduated from Whitesboro High School, Marcy, N.Y.; B.A., Reed College, Portland, Oreg., 1976; business owner; unsuccessful candidate for election to the United States House of Representatives in 2008; elected as a Republican to the One Hundred Twelfth and to the succeeding Congress (January 3, 2011-present). 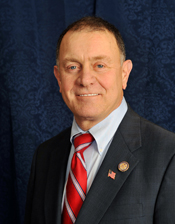