A Representative from Missouri; born in St. Louis, St. Louis County, Mo., January 31, 1941; graduated from South West High School, 1958; B.S., Northwestern University, Evanston, Ill., 1962; J.D., University of Michigan Law School, 1965; lawyer, private practice; Missouri Air National Guard, 1965-1971; Democratic committeeman, St. Louis, Mo., 1968-1971; alderman, St. Louis, Mo., 1971-1976; elected as a Democrat to the Ninety-fifth and to the thirteen succeeding Congresses (January 3, 1977- January 3, 2005); unsuccessful candidate for the Democratic presidential nomination in 1988 and in 2004; majority leader (One Hundred First through One Hundred Third Congresses); minority leader (One Hundred Fourth through One Hundred Seventh Congresses). Retired United States Congressman. Congressman Gephardt received a Bachelor of Science degree from Northwestern University and a Juris Doctor degree from the University of Michigan Law School. After serving as a Democratic committeeman and alderman in his native St. Louis, he was elected to the United States House of Representatives in 1976, representing Missouri's Third District. He was re-elected 13 times. While in the House, Congressman Gephardt served on the Budget Committee and on the Ways and Means Committee. He was elected Chairman of the House Democratic Caucus in 1984; and he served as majority leader from 1989 to 1994. In 1994 he was elected House Democratic Leader, the top Democratic leadership position in the House. He served as minority leader from 1995 to 2003. After deciding not to seek re-election, Congressman Gephardt retired from the House on January 3, 2005. Congressman Gephardt serves as a consultant to The Goldman Sachs Group, Inc. and as senior counsel to the law firm of DLA Piper Rudnick. He is a director of Spirit Aerosystems Holdings, Inc., Centene Corporation, Embarq Corporation and Dana Holding Corporation. He also serves on the board of the St. Jude Children's Hospital. 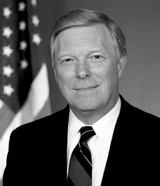