US Representative from Florida (2007-present)

A Representative from Florida for the 13th then the 16th districts. Vernon Buchanan is a businessman, the head of an automotive dealership "empire" in Florida and having ownership interest in dozens of other businesses including offshore reinsurance and a charter jet business. His net worth in 2018 was reported at $73.9 M. born on May 8, 1951; B.B.A., Cleary University, Ann Arbor, MI., 1975; M.B.A., University of Detroit, MI., 1986; Michigan Air National Guard, 1970-1976; businessman; campaign staff; elected as a Republican to the One Hundred Tenth and to the three succeeding Congresses (January 3, 2007-present). 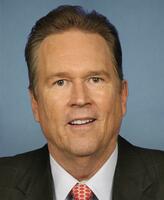