Represented California's 45th district in the US Congress for two terms, from 2015 to 2019. Mimi Walters was defeated in Nov 2018 by Democrat Katie Porter. "Mimi Walters possesses a background in both business and local government. Her professional career has included time with the firm of Drexel, Burnham & Lambert as an Investment Executive and then subsequently joining Kidder Peabody & Company. Mimi began her public service on the Laguna Niguel City Council in 1996. She served as Mayor in 2000. As a Councilwoman, Mimi was a leading voice for fiscally responsible government and local control. As a Director of the El Toro Reuse Planning Authority (ETRPA), Mimi helped defeat efforts to convert the El Toro Marine Air Base into a commercial airport. She was named Chair of ETRPA in January of 2003. Mimi is a founder of the California Women’s Leadership Association (CWLA) and has served on the Boards of the National Association of Women Business Owners (NAWBO), the Laguna Niguel Republican Women Federated, the American Cancer Society, and the South Coast Medical Center Foundation. She has been named "Local Elected Official of the Year" in 1997, "Volunteer of the year" in 1998 and “Legislator of the Year” in 2006 by the Orange County Republican Party. Mimi Walters graduated from the University of California at Los Angeles in 1984 with a Bachelor of Arts degree in Political Science. She and her husband, David, live in Laguna Niguel with their four children." Source: Official bio 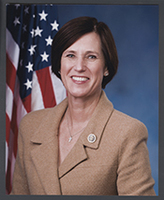