Former Representative from California's 49th district for 9 consecutive terms starting in 2001. Darrell Issa did not seek reelection in 2018, rather than taking his chances in a very contested election. In September 2018, President Trump nominated Issa to head the US Trade and Development Agency (USTDA), but his confirmation by the Senate has been stalling for almost a year, in particular in relation to information in his FBI file. With the likeliness of failing to become Director of USTDA, Issa has indicated his intention on seeking election as US Representative for California's 50th district in 2020 would his fellow Republican Duncan Hunter, a long time Representative of the 50th and currently under fire for ethical violation, decides not to run in 2020. The 50th district is a relative Republican strong hold and would likely provide an easy return to Congress for Issa, albeit one that may not be welcome by many GOP lawmakers. With an estimated net worth of $436M (2014 est.), Darrell Issa was the wealthiest member of Congress. Born in Cleveland, OH, November 1, 1953; B.A., Siena Heights College, Adrian, Mich., 1976; United States Army, 1970-1980; business owner; elected as a Republican to the One Hundred Seventh and to the six succeeding Congresses (January 3, 2001-2019); chair, Committee on Oversight and Government Reforn (112th and 113th Congresses). 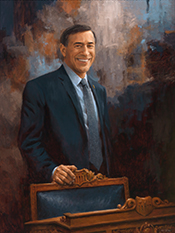