Most recently, Bennett worked for Tyco International for 7 years as the Vice President for Global Public Affairs with operations in Washington, Brussels and Beijing, where she was responsible for all aspects of public policy issues and government relations globally. She retired from Tyco in April 2015. Catherine P. Bennett, an experienced government affairs lawyer and lobbyist for Pfizer, Inc., has joined the firm as a partner in the Legislative practice in Washington, D.C. Ms. Bennett spent 27 years with Pfizer, where she most recently served as vice president of government relations. Joining Pfizer in 1978 as an assistant director of government relations, Ms. Bennett eventually became one of the company’s key representatives on Capitol Hill. She was directly responsible for framing Pfizer’s positions on taxation, international trade and intellectual property, as well as drug importation, international price controls, and even judicial reform. Ms. Bennett worked on a number of important pieces of legislation, including the seminal 1984 Drug Price Competition and Patent Term Restoration Act (Hatch-Waxman) and the 2003 Medicare Modernization Act, along with a dozen different extensions of the Research and Development Tax Credit. She also led Pfizer's lobbying strategies on international tax reform, asbestos litigation reform, patent law reform and FDA/drug regulation reform issues. From 2004-2006, she served as an aide to then Pfizer CEO Hank McKinnell, in his role as chairman of the Business Roundtable. In 2005, Ms. Bennett played a lead role in the successful conclusion of negotiations on an amendment to the WTO's Trade-Related Aspects of Intellectual Property Rights (TRIPS) Agreement, an area where she had been actively involved for many years. Prior to joining Pfizer, Ms. Bennett worked on staff of the National Security Council and was responsible for legislation impacting national security issues for the White House. She also served as primary liaison with the congressional relations offices of both the State and Defense Departments. While with the National Security Council in the mid-1970s, she came to know Henry Kissinger, who at the time was both Assistant for National Security Affairs to President Ford as well as U.S. Secretary of State. After her time at the White House, Ms. Bennett conducted research for Dr. Kissinger’s memoir, The White House Years. Ms. Bennett is chairman emeritus and former chairman of the board of the Cancer Research and Prevention Foundation. A cancer survivor herself, she also serves on the advisory board of the National Dialogue on Cancer (C-Change). Ms. Bennett earned her J.D. cum laude from Georgetown International Law Center (1987). She holds a B.A. fromSmith College (1972) and an M.A. in International Economics from Johns Hopkins School of Advanced International Studies (1975). 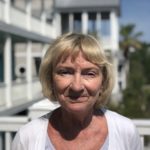