US Representative from Washington

Former Congressman George R. Nethercutt, Jr., who serves as Of-Counsel to the firm, brings a wealth of public and private experience to BlueWater Strategies, having served as a member of the United States House of Representatives from 1995 to 2005. Mr. Nethercutt's historic 1994 victory unseated then-Speaker of the House Tom Foley, the first defeat of a sitting Speaker since 1860. Mr. Nethercutt represented Washington's 5th Congressional District until choosing to run for the U.S. Senate in 2004. While serving in the U.S. House of Representatives, he served on the prestigious House Committee on Appropriations and the House Science Committee. Prior to his election to Congress, Mr. Nethercutt was a practicing attorney in Washington State, specializing in estate planning, probate and adoption law. He previously served as staff counsel, and then chief of staff, to U.S. Senator Ted Stevens of Alaska, working on such issues as agriculture, fisheries, timber and mining. Mr. Nethercutt co-founded the private, non-profit Vanessa Behan Crisis Nursery for the prevention of child abuse. He has also served as president of the Spokane chapter of the Juvenile Diabetes Research Foundation. Mr. Nethercutt currently serves on the board of directors of the Washington Policy Center in Seattle, a nonpartisan free-market think tank. He also serves as of-counsel to the Spokane, Washington-based law firm Paine Hamblen LLP and sits on the Permanent Joint Board on Defense-U.S./Canada to which he was appointed U.S. Chairman by President George W. Bush in 2005. Mr. Nethercutt earned a bachelor's degree in English from Washington State University before graduating from Gonzaga University School of Law. He and his wife, Mary Beth, have two children. A Representative from Washington; born in Spokane, Spokane County, Wash., October 7, 1944; graduated from North Central High School, Spokane, Wash.; B.A., Washington State University, Spokane, Wash., 1967; J.D., Gonzaga University School of Law, Spokane, Wash., 1971; clerk to United States Judge Raymond E. Plummer of the District of Alaska, 1971-1972; staff counsel and chief of staff to United States Senator Ted Stevens of Alaska, 1972-1977; lawyer, private practice; elected as a Republican to the One Hundred Fourth and to the four succeeding Congresses (January 3, 1995- January 3, 2005); not a candidate for reelection, but was an unsuccessful candidate to the United States Senate in 2004. 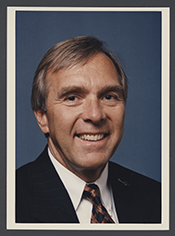