Eric Cantor is Vice Chairman and Managing Director of Moelis & Company. He is also a member of the Moelis & Company Board of Directors. Mr. Cantor, who has more than 25 years of political and business experience, was formerly United States Representative for Virginia’s 7th Congressional District and House Majority Leader. He served in the U.S. House of Representatives between 2001-2014. He was elected by his colleagues in the House to serve as the Majority Leader for the 112th and 113th Congresses where he led the public policy agenda for the House. During his time in office, Mr. Cantor was a leading voice on the economy, job creation and policies focused on improving the lives of the American middle class. He championed pro-growth solutions including lowering taxes, eliminating excessive regulation, strengthening businesses, and encouraging entrepreneurship. He was also regularly featured in publications focusing on a wide range of topics including both domestic and international matters. Mr. Cantor received his undergraduate degree from The George Washington University, his law degree from The College of William and Mary, and his master's degree from Columbia University in New York. Congressional Bio: A Representative from Virginia; born in Richmond, Henrico County, Va., June 6, 1963; B.A., George Washington University, Washington, D.C., 1985; J.D., College of William and Mary, Williamsburg, Va., 1988; M.S., Columbia University, New York, N.Y., 1989; lawyer; small businessman; member of the Virginia state house of delegates, 1992-2001; elected as a Republican to the One Hundred Seventh and to the six succeeding Congresses (January 3, 2001-present); minority whip (One Hundred Eleventh Congress); majority leader (One Hundred Twelfth and One Hundred Thirteenth Congresses). 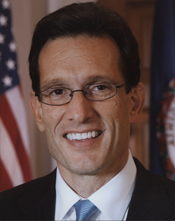