Charles O. Rossotti is an Operating Executive focusing primarily on investments in the fields of information technology and business services. He is based in Washington, DC. Prior to joining Carlyle, Mr. Rossotti served from 1997 to 2002 as Commissioner of the Internal Revenue Service, the federal agency that serves 175 million taxpayers and employs 100,000 people. As a result of his leadership, the public's rating of the IRS increased greatly and relationships of trust with Congress, tax professionals and business groups were restored, and the agency's effectiveness turned around. In 1970, Mr. Rossotti co-founded American Management Systems, Inc. and until 1997 served at various times as President, Chief Executive Officer and Chairman. AMS grew through his tenure, becoming a major international business systems consulting and systems integration firm with revenues of more than $1 billion. AMS clients include Fortune 500 companies and federal, state and local government agencies in North America and Europe. In 1979, AMS was one of the first technology services firms to go public. Mr. Rossotti earned his A.B. in economics, magna cum laude, from Georgetown University and his M.B.A., with high distinction, from Harvard Business School. In 1970, he received the Distinguished Civilian Service Medal from the Department of Defense. In 2002, he received the Alexander Hamilton Medal from the Department of Treasury. In 2003, he received an Alumni Achievement Award from Harvard Business School. Mr. Rossotti is on the Board of Directors of Carlyle portfolio companies Booz Allen Hamilton, Quorum Management Solutions and Primatics Financial. In addition, he currently serves on the Board of Directors of Bank of America Corporation and AES Corporation, a publicly-owned global electric power company. In addition to his business activities, Mr. Rossotti serves on the Boards of Capital Partners for Education and the Comptroller General’s Advisory Committee of the Government Accountability Office (GAO). In 2005, he served as a member of President Bush’s advisory panel on reform of the income tax. Mr. Rossotti is the author of "Many Unhappy Returns" (Harvard Business School Press 2005), a book about his experience turning around the IRS. 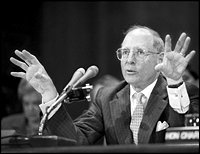