US Senator from Virginia

In his 30 years in the Senate, the former Navy secretary was a leading Republican voice on military policy. He was once married to Elizabeth Taylor. Warner died on Tuesday May 25 2021 at his home in Alexandria, Va. He was 94. John William Warner III was born on Feb. 18, 1927, in Washington to Dr. John Warner Jr. and Martha (Budd) Warner. His father was an obstetrician-gynecologist in Washington, his mother a homemaker. Mr. Warner attended St. Albans boarding school in Washington but left at age 17 to join the Navy and serve in the final months of World War II. He never formally received a high school diploma. He went on to enroll at Washington and Lee University, graduating in 1949, and at the University of Virginia School of Law, before interrupting his studies there to join the Marines during the Korean War. After military service, he returned to law school and was awarded a degree in 1953. He then became a law clerk with the United States Court of Appeals for the District of Columbia Circuit and, from 1956 to 1960, an assistant U.S. attorney in the district. He worked in private law practice for most of the 1960s until being appointed under secretary of the Navy by President Richard M. Nixon. He became secretary in 1972 and served for two years. In 1976 he was the federal coordinator of the national bicentennial celebration. For many years he raised beef cattle on a farm in Middleburg, Va. For a time Mr. Warner may have been best known nationally as the dashing sixth husband of the actress Elizabeth Taylor. Her celebrity was a draw on the campaign trail during his difficult first race for the Senate, in 1978, an election he won narrowly to start his political career. The couple divorced in 1982. Though a popular figure in his state, Mr. Warner was often at odds with Virginia conservatives. He angered the National Rifle Association with his backing of an assault weapons ban. He infuriated some state Republicans in 1994 when he refused to support Oliver L. North, the former White House aide at the center of the Iran-contra scandal during the Reagan administration, in Mr. North’s bid for the Senate. And he opposed Reagan’s ultimately unsuccessful Supreme Court nomination of Judge Robert H. Bork. The peak of his power in the Senate began in 1999, when he became chairman of the Armed Services Committee. Joining with Senator John McCain, who had been a prisoner of war in Vietnam, Mr. Warner thwarted Bush administration efforts to reinterpret the Geneva Convention on the treatment of prisoners in wartime. He was also a leading member of the so-called Gang of 14, a bipartisan group of senators who struck an independent agreement on judicial nominations in 2005 and averted a fight over the future of the Senate filibuster. Mr. Warner announced in August 2007 that he would not run in 2008. Mr. Warner endured a reputation as something of a playboy after his divorce from a member of the wealthy Mellon family, his marriage to Ms. Taylor and a public relationship with the newscaster Barbara Walters. He is survived by his wife, Jeanne (Vander Myde) Warner, who was a widow when they married in 2003; three children from his first marriage, to Catherine Mellon — John Warner IV, Virginia Warner and Mary Conover; and two grandsons. 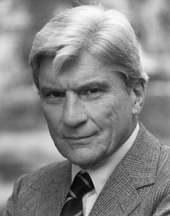