Elected to Congress at 60, he served for 18 years and for a while counted among his interns one with an unusual resume: the Right Rev. M. Thomas Shaw, the Episcopal bishop in Massachusetts. Then when Mr. Houghton decided not to seek a 10th congressional term, he switched roles with Shaw and, at 78, became the bishop’s intern in Boston. A descendant of the founder of Corning Glass Works, Mr. Houghton had led his family’s company as chairman and chief executive before stepping down and running for Congress. He was 93 when he died Wednesday in his Corning, N.Y., home, and formerly had lived in Cohasset. grandson of Alanson Bigelow Houghton), a Representative from New York; born in Corning, Steuben County, N.Y., August 7, 1926; graduated from St. Pauls School, Concord, N.H.; B.A., Harvard University, Cambridge, Mass., 1950; M.B.A., Harvard Business School, Cambridge, Mass., 1952; United States Marine Corps, 1945-1946; business executive; elected as a Republican to the One Hundredth and to the eight succeeding Congresses (January 3, 1987-January 3, 2005); not a candidate for reelection to the One Hundred Ninth Congress in 2004. The second of five siblings, Amory Houghton Jr. was born in Corning, N.Y., on Aug. 7, 1926. His father, Amory Houghton Sr., had led the family’s business and served as ambassador to France during President Dwight D. Eisenhower’s administration. His mother, Laura Richardson, chaired the Girl Scouts nationally and was a philanthropist. Mr. Houghton went by Amo; his first son, Amory III, shortened his name to Mory. After graduating from Harvard in 1950 and Harvard Business School in 1952, he went to work at Corning, where he became president in 1961 and chairman and chief executive in 1964. In 1950, he married Ruth Frances West, and they had four children. Their marriage ended in divorce. Mr. Houghton married Priscilla Dewey in 1989. She was a widow and a Democrat — and a playwright and lyricist as well, directing the Charles River Creative Arts Program in Dover. She died in 2012. 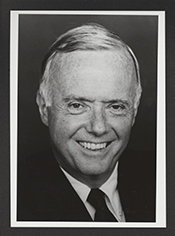