Former US Representative from Tennessee (TN8 1989 to 2011). Currently chairman of the ICCF foundation. 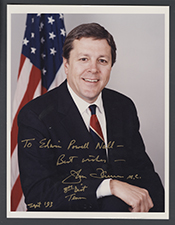