Mike McConnell is a Senior Executive Advisor and former Vice Chairman of Booz Allen Hamilton, where his primary roles included serving on the firm’s Leadership Team and leading Booz Allen’s rapidly expanding cyber business. After retiring from the Navy in 1996 as a Vice Admiral, Mr. McConnell joined Booz Allen, and led the development of the firm’s Information Assurance business and the firm’s Intelligence business focused on policy, transformation, homeland security, and intelligence analytics, rising to the position of senior vice president. Upon being asked by President George W. Bush in 2007 to become the second Director of National Intelligence, he left Booz Allen and served as the DNI for two years under Presidents Bush and Obama. As the DNI he managed the expansive national Intelligence Community – an organization of over 100,000 people, and an annual global enterprise budget of over $47B – and had extensive interactions with the White House, the President’s Cabinet, Congress, international leaders, and the US business community. In 2009, Mr. McConnell returned to Booz Allen as an executive vice president to lead the firm’s Intelligence business. In 2011 he was elevated to Vice Chairman of the firm. Mr. McConnell’s career has spanned over 40 years focused on international development and foreign intelligence issues. His 29-year distinguished career as a US Navy intelligence officer included significant assignments that impacted national security issues. During Desert Shield/Storm and the dissolution of the Soviet Union, Mr. McConnell served as the Intelligence Officer for the Chairman of the Joint Chiefs of Staff, General Colin Powell, and the Secretary of Defense, Dick Cheney. From 1992 to 1996 he served as the Director of the National Security Agency (DIRNSA) under Presidents George H.W. Bush and William J. Clinton. As DIRNSA, he led the agency during a critical period as it adapted to the multi-polar threats brought about by the end of the Cold War, providing global intelligence and information security services to the White House, Cabinet officials, Congress, and a broad array of military and civil intelligence customers. During the same period, he also served as a member of the Director of Central Intelligence’s senior national intelligence leadership team, which addressed major programmatic and substantive foreign intelligence issues. In addition to having been awarded many of the nation's highest military awards for meritorious service, Mr. McConnell has twice received the nation's highest award for service in the Intelligence Community, once by President Clinton and once by President George W. Bush. He has also served as the Chairman and CEO of the Intelligence and National Security Alliance (INSA). He is the 2011 recipient of INSA’s William Oliver Baker Award, which is awarded annually for sustained and excellent service in intelligence and national security. Mr. McConnell holds an M.P.A. degree from George Washington University, is a graduate of the National Defense University (Global Telecom), the National Defense Intelligence College (Strategic Intelligence), and holds a B.A. degree in Economics from Furman University. In addition to being a member of Phi Beta Kappa, Mr. McConnell has also been awarded three Honorary Doctorate degrees – the most recent from George Washington University in 2008. 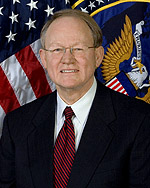