Former US Representative and Senator from Arkansas

Most recently, Senator Hutchinson served as United States Senator from 1997 through 2002. As a member of the Senate, he worked on the following committees: Armed Services Committee, where he was a ranking member of the Armed Services Personnel Subcommittee; Health, Education, Labor, and Pensions (HELP) Committee, where he was a ranking member of the HELP Aging Subcommittee; Agriculture, Nutrition, and Forestry Committee; Veterans’ Affairs Committee; Environment and Public Works Committee; and, the Special Committee on Aging. Senator Hutchinson was a chief author in the Senate of the No Child Left Behind Act and the Education Savings Account Law. He also founded the Senate Biotechnology Caucus in 2001. Senator Hutchinson’s career in public service began with his election to the Arkansas State House of Representatives, where he served eight years from 1985 through 1992. In 1992, Senator Hutchinson was elected to represent Arkansas’s Third Congressional District in the United States House of Representatives, where he served two terms until 1996. While in the House of Representatives, he was the original sponsor of the $500 Per Child Tax Credit Plan. (brother of Asa Hutchinson), a Representative and a Senator from Arkansas; born in Bentonville, Ark., August 11, 1949; attended public schools in Gravette and Springdale; graduated from Bob Jones University, Greenville, S.C. 1972; received M.A. in political science from University of Arkansas, Fayetteville 1990; history instructor, John Brown University, Siloam Springs, Ark.; pastor; co-owner, KBCV radio station 1982-1989; served in Arkansas house of representatives 1985-1992; elected as a Republican to the One Hundred Third Congress and to the succeeding Congress (January 3, 1993-January 2, 1997); was not a candidate for reelection to the House of Representatives in 1996, but was elected to the United States Senate in 1996 and served from January 7, 1997, to January 3, 2003; unsuccessful candidate for reelection in 2002; senior advisor, law firm of Dickstein, Shapiro, Morin and Oshinsky; is a resident of Alexandria, Va. 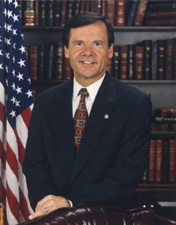