Governor of Arkansas, US Representative from Arkansas

(brother of Timothy Hutchinson), a Representative from Arkansas; born in Bentonville, Benton County, Ark., December 3, 1950; graduated from Springdale High School, Springdale, Ark., 1968; B.S., Bob Jones University, Greenville, S.C., 1972; J.D., University of Arkansas School of Law, Fayetteville, 1975; city attorney, Bentonville, Ark., 1977-1978; United States Attorney for the Western District of Arkansas, 1982-1985; unsuccessful candidate for Arkansas attorney general, 1990; unsuccessful candidate for the United States Senate in 1986; chairman, Arkansas State Republican Committee, 1990-1995; elected as a Republican to the One Hundred Fifth Congress and to the two succeeding Congresses, served until resignation on August 6, 2001 (January 3, 1997-August 6, 2001); one of the managers appointed by the House of Representatives in 1998 to conduct the impeachment proceedings of President William Jefferson Clinton; Director, Drug Enforcement Administration, 2001-2003; Under Secretary for Border and Transportation Security, Department of Homeland Security, 2003-2005. Mr. Hutchinson draws on his experience as a litigator, former federal prosecutor and executive in Federal enforcement agencies to advise and support clients during complex criminal and civil litigation. He also uses his experience sitting on and advising corporate boards to handle corporate internal investigations. Mr. Hutchinson is Senior Trial Counsel and a partner within Venable's Litigation Division. Mr. Hutchinson is an experienced and tough litigator. Before serving in the Federal government, Mr. Hutchinson practiced law in Arkansas for over 21 years. During which time he tried more than 100 jury trials. At the age of 31, Mr. Hutchinson became the youngest U.S. Attorney in the nation when he was appointed to the Western District of Arkansas by President Ronald Reagan. Most recently, Mr. Hutchinson led the Homeland Security Practice for Venable's Legislative Group. His move to the firm's Litigation Division was motivated by the desire to return to his roots and try cases in the courtroom. Mr. Hutchinson joined Venable in 2005 after serving as Undersecretary of Homeland Security. During his tenure at the Department of Homeland Security (DHS), Mr. Hutchinson was responsible for managing and coordinating the overall security of U.S. borders and transportation systems, setting immigration enforcement policies and priorities, and developing and implementing visa security programs. Mr. Hutchinson also worked to enhance the security of transportation systems through new federal security requirements for the aviation, rail and transit sectors, innovative technology pilot programs for passenger and baggage screening, more effective cargo inspections, and increased information sharing. Prior to serving as Undersecretary of Homeland Security, Mr. Hutchinson led the US Drug Enforcement Agency (DEA) from 2001-2003. He was elected to the US House of Representatives in 1997, and represented Arkansas' Third Congressional District for three terms before resigning his seat to become DEA Administrator. During his tenure in the House of Representatives, Mr. Hutchinson served on the Judiciary and Intelligence committees. 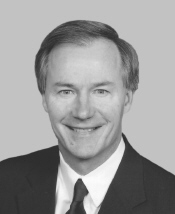