Software visionary stepped down from day-to-day duties at Microsoft in June to devote his talents and riches to philanthropy. The $36 billion Bill & Melinda Gates Foundation donates to causes such as fighting hunger in developing countries, improving education in America's high schools and developing vaccines against malaria, tuberculosis and AIDS. Appointed Office veteran Jeffrey Raikes chief exec of Gates Foundation in September. Gates remains Microsoft chairman. Appearing in TV commercials with comedian Jerry Seinfeld as part of campaign to improve Windows brand; Vista operating system continues to get mixed reviews. Sells shares each quarter, redeploys proceeds via investment vehicle Cascade; more than half of fortune is outside Microsoft. Stock down 5% in past 12 months after failed buyout attempt of Yahoo erased 25% pop last fall. Masterful capitalist wants to change the rules. Talked up "creative capitalism" at Davos: "I am an impatient optimist. The world is getting better, but it's not getting better fast enough, and it's not getting better for everyone." Wants companies to match profitmaking with doing good. Inflation-adjusted net worth would top $90 billion if he hadn't given away any cash. 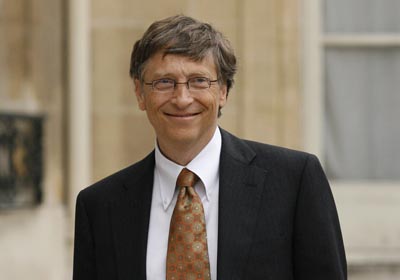