US Representative from New Jersey

A Representative from New Jersey; born in Hackensack, Bergen County, N.J., September 21, 1951; attended public schools; B.A., DePauw University, 1973; J.D., Southern Methodist University, 1976; newspaper owner; executive director for the New Jersey gubernatorial election campaign of Raymond H. Bateman, 1977; consultant to the campaign committees of United States Representative James A. Courter of New Jersey, 1978, and Governor Thomas H. Kean of New Jersey, 1981; campaign manager for United States Representative James A. Courter of New Jersey, 1982, and United States Representative Dean A. Gallo of New Jersey, 1984; member, New Jersey assembly, 1980-1993; chairman, New Jersey Republican Party, 1988-1992; elected as a Republican to the One Hundred Third and to the three succeeding Congresses (January 3, 1993, to January 3, 2001); was not a candidate in 2000 for reelection to the United States House of Representatives, but was an unsuccessful candidate for nomination to the United States Senate; unsuccessful candidate for nomination for Governor of New Jersey in 2001. After a failed primary bid for the governor’s office in 2001, Mr. Franks became president of the HealthCare Institute of New Jersey, a trade group for the pharmaceutical research and medical technology industry. He is survived by his wife, Fran; three daughters, Sara, Abigail and Kelly; his mother, June; and his sister, Judy; brother-in-law, Jeremy; and niece, Mary Hannah. He was a powerful figure in New Jersey's resurgent Republican Party, and twice served as the state's GOP chairman and as a congressional campaign manager. He spent 14 years in the state legislature, as a protege of Gov. Thomas Kean, before being elected to Congress from New Jersey's 7th Congressional District in 1992. In 2000, Mr. Franks narrowly lost a race for the U.S. Senate against Jon S. Corzine, who heavily outspent his Republican opponent. Mr. Franks lost a bid for the Republican nomination for governor in 2001. He then became director of the HealthCare Institute of New Jersey, a lobbying group for pharmaceutical and medical technology companies. Robert Douglas Franks was born in Hackensack, N.J., and graduated from DePauw University in Indiana. He received a law degree from Southern Methodist University in Dallas in 1976, then returned to New Jersey to work as a political consultant. Survivors include his wife, Fran Franks, and three daughters. 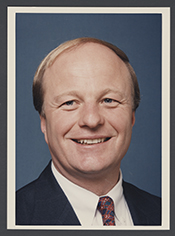