Ambassador Clifford M. Sobel was sworn in by Secretary of State Condoleezza Rice and Justice Antolin Scalia as the United States Ambassador to the Federative Republic of Brazil on July 20, 2006. Ambassador Sobel also served as the 62nd United States Ambassador to the Kingdom of the Netherlands from 2001-2005. After serving in the Netherlands, Ambassador Sobel was on the Board of Directors of Aegon (NYSE AEG) and AlpInvest, the largest global private equity fund. He also served on the Advisory Committee for EUCOM, the Military Commander Advisory Board for Europe and Africa, the NATO Mentors Board, and The Millennium Promise Board of Directors, a not for profit organization supporting the United Nations Millennium Goals. Prior to his becoming United States Ambassador to the Netherlands, Clifford Sobel was Chairman of Net2Phone, Inc., a public company at that time listed on the NASDAQ and the largest provider of Internet telephone service, marketing a broad range of enhanced Internet communication applications. Ambassador Sobel was also Chairman and President of SJJ Investment Corporation and CMS Realty Company, where he was responsible for investment decisions in a wide variety of areas. During the 1970s and 80s, he founded and later became Chairman of several companies that designed, manufactured and imported fixtures for retail interiors and themed environments, such as Disney or Warner Brothers. By Presidential appointment, Clifford Sobel served on the United States Holocaust Memorial Council in Washington, D.C. from 1994 to 1998. He was on the board of the Lexington Institute and chairman of the Alexis de Tocqueville Institution, which are public policy think tanks focused on education reform, national security, deregulation, corporate governance and tax rate reduction. Ambassador Sobel was also on the advisory boards of Empower America and Business Executives for National Security (BENS). He was asked to testify before Congress on fast-track international trade treaties and from 1993 to 1997, he served as a Secretary of Defense appointment to the Board of Visitors of the Naval Post Graduate School in Monterey, California. In his home state of New Jersey, Ambassador Sobel is a member of the Board of the New Jersey Performing Arts Center and served on the executive committees of Prosperity New Jersey, a state committee for the growth of New Jersey, and of the United Jewish Federation of Metrowest NJ. Ambassador Sobel attended the University of Vermont and graduated with honors from the New York University School of Business. 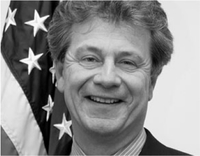