Dick Zimmer represented New Jersey’s 12th Congressional District in the U.S. House of Representatives. He was chosen by his colleagues to serve on the powerful House Ways and Means Committee, where he was a member of its Subcommittees on Trade and Oversight. He was a principal architect of bipartisan legislation cutting the capital gains tax and was actively involved in Medicare and international trade issues. Prior to his appointment to the Ways and Means Committee, Dick Zimmer was a member of the House Science, Space and Technology Committee and the Government Operations Committee. As a member of the Environment Subcommittee, he introduced comprehensive environmental risk-assessment legislation that included many provisions later incorporated in amendments to the Clean Water Act and subsequent legislation. In recognition of his work on risk assessment, a prominent environmental writer called Zimmer “the leading Republican thinker on regulatory reform.” He is the author of the federal Megan’s Law, which requires parents to be notified when a convicted sex offender moves into their neighborhood. In 1996 and 2008, Zimmer was nominated by the New Jersey Republican Party to be its candidate for the U.S. Senate. Prior to his election to Congress, Dick Zimmer was a member of the New Jersey State Assembly, where he was chairman of the State Government Committee, and the State Senate, where he served on the Revenue, Finance and Appropriations Committee. He sponsored New Jersey’s original farmland preservation law and the legislation creating the state’s radon detection and remediation program. Dick Zimmer earned his law degree from Yale Law School, where he was an editor of the Yale Law Journal. He received a B.A. degree, with high honors in political science, from Yale College. Dick Zimmer began his legal career as a corporate associate at the firm of Cravath, Swaine & Moore, where he concentrated on private placements and underwritten public offerings, real estate and equipment lease financings, mergers and acquisitions and advice to corporate management and control shareholders. He left Cravath to become a general attorney for Johnson & Johnson. At J&J he specialized in securities transactions and SEC practice, corporate acquisitions and dispositions and information technology contracts. He served successively as a member of the board of directors and de facto general counsel for several Johnson & Johnson subsidiaries. From 2001 until 2009 Dick Zimmer was of counsel with the Washington, D.C. office of Gibson, Dunn & Crutcher, where as a member of the firm’s Public Policy Practice Group he provided clients with strategic government affairs advice and representation on a wide range of matters including taxation, health care, pensions, homeland security, federal contracts, federal appropriations, international relations, environment, education, corporate governance, financial regulation and telecommunications. 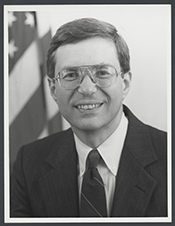