US Senator and Representative from Arizona

A Senator and a Representative from Arizona; born in Panama Canal Zone, August 29, 1936; attended schools in Alexandria, Va.; graduated, United States Naval Academy, Annapolis, Md. 1958, and the National War College, Washington, D.C. 1973; pilot, United States Navy 1958-1981, prisoner of war in Vietnam 1967-1973; received numerous awards, including the Silver Star, Legion of Merit, Purple Heart, and Distinguished Flying Cross; elected as a Republican in 1982 to the Ninety-eighth Congress; reelected to the Ninety-ninth Congress in 1984 and served from January 3, 1983, to January 3, 1987; elected to the United States Senate in 1986; reelected in 1992, 1998, 2004, and again in 2010 for the term ending January 3, 2017; chair, Committee on Indian Affairs (One Hundred Fourth Congress; One Hundred Ninth Congress), Committee on Commerce, Science, and Transportation (One Hundred Fifth through One Hundred Sixth Congresses, One Hundred Seventh Congress [January 20, 2001-June 6, 2001], One Hundred Eighth Congress); was an unsuccessful candidate for the Republican presidential nomination in 2000; was an unsuccessful Republican nominee for President of the United States in 2008. 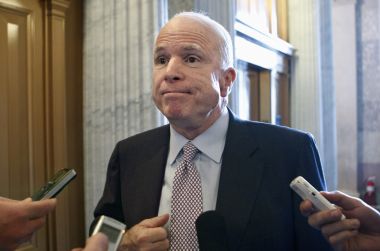