American politician, lobbyist and attorney. He served as US Senator for Connecticut from 1989 to 2013. A former Democrat, he as on on the Gore-Lieberman ticket for the 2000 US presidential election, defeated, though having won the popular vote. Unsuccessful candidate for Democratic nomination for president, 2004. He endorsed Republican John McCain in his 2008 bid for the presidency, and was subsequently officially listed as an "Independent Democrat" in the Senate official record. Older details: Graduated from Yale University 1964; law degree from Yale Law School 1967; member of Connecticut state senate 1970-1980, majority leader 1974-1980; attorney general of Connecticut 1983, 1986-1988; 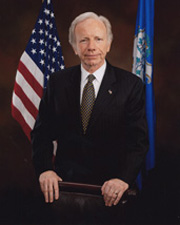