Bobby Jindal is originally from Baton Rouge, Louisiana, and currently serves as Chairman of the Center for a Healthy America. Jindal has a well-earned reputation as one of America’s most successful public sector executives and one of the boldest innovators in the health care and education sectors. Jindal used his two terms as Governor of Louisiana to rebuild and diversify the state’s economy and financial footing in the aftermath of Hurricanes Katrina and Rita. Jindal’s agenda included top-to-bottom reformation and privatization of the state-run charity hospital and the state’s healthcare payer systems. Despite being the Nation’s youngest governor when he was elected in 2007, Jindal had been well-prepared to become the state’s CEO, with stints as the head of the state Department of Health and Hospitals, as President of the University of Louisiana System, Assistant Secretary of the U.S. Department of Health and Human Services, and Executive Director of the National Bipartisan Commission on the Future of Medicare – all before his thirtieth birthday. Jindal graduated with a Bachelor of Science from Brown University with honors in Biology and Public Policy, and received an M.Litt. in Politics from Oxford University where he studied as a Rhodes Scholar. A Representative from Louisiana; born in Baton Rouge, East Baton Rouge Parish, La., June 10, 1971; graduated from Baton Rouge High School, Baton Rouge, La., 1988; B.S., Brown University, Providence, R.I., 1991; M.Litt., Oxford University, Oxford, England, 1994; secretary, Louisiana Department of Health and Hospitals 1996-1998; appointed executive director of the National Bipartisan Commission on the Future of Medicare, 1998; president, University of Louisiana system, 1999; appointed Assistant Secretary for Planning and Evaluation, Department of Health and Human Services by President George W. Bush on March 7, 2001; elected as a Republican to the One Hundred Ninth Congress and to the succeeding Congress, until his resignation January 14, 2008, (January 3, 2005-January 14, 2008); Governor of Louisiana, 2008-present. 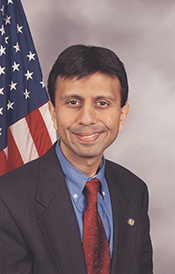