Bob Goodlatte represented Virginia's 6th district in the US House of Representatives from 1993 to 2019. He didn't seek reelection in 2018. Born in Holyoke, MA, September 22, 1952; B.A., Bates College, Lewiston, ME, 1974; J.D., Washington and Lee University, Lexington, VA., 1977; lawyer, private practice; staff, United States Representative M. Caldwell Butler of Virginia, 1977-1979; one of the managers appointed by the House of Representatives in 2009 to conduct the impeachment proceedings of Samuel B. Kent, judge of the United States District Court for the Southern District of Texas; elected as a Republican to the One Hundred Third and to the ten succeeding Congresses (January 3, 1993-present); chair, Committee on Agriculture (One Hundred Eighth and One Hundred Ninth Congresses); chair, Committee on the Judiciary (One Hundred Thirteenth Congress). 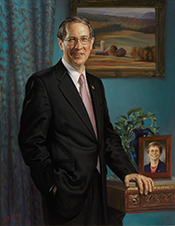