US Representative from Louisiana

A Representative from Louisiana; born in Quitman, Jackson Parish, La., December 5, 1946; graduated from Jonesboro-Hodge High School, Jonesboro, La., 1964; graduated, University of Louisiana-Monroe, Monroe, La.; United States Air Force reserve, 1965-1971; insurance agent; businessman; member of the Louisiana state house of representatives, 1987-2002; elected as a Democrat to the One Hundred Eighth Congress; changed from a Democrat to a Republican on August 9, 2004; reelected as a Republican to the One Hundred Ninth and to the four succeeding Congresses until his resignation on September 27, 2013 (January 3, 2003- September 27, 2013). 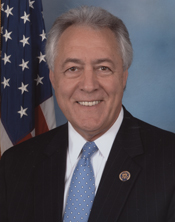