A Representative from Louisiana; born in Colorado Springs, El Paso County, Colo., April 30, 1943; graduated from St. Martins High School, New Orleans, 1960; B.A., Tulane University, New Orleans, La., 1967; J.D., Tulane University Law School, New Orleans, La., 1968; admitted to the Louisiana bar in 1968 and commenced practice in New Orleans; served in the United States Navy, 1961-1963; United States Naval Reserve, 1963-1967 (inactive); graduate, Loyola Institute of Politics, Chicago, Ill., 1973; assistant United States attorney, deputy chief, criminal division, 1970-1973; chief special prosecutor and chief, armed robbery division, Orleans Parish district attorneys office, 1974-1975; chief prosecutor, organized crime unit, Louisiana attorney generals office, 1975-1976; delegate to seven Republican National Conventions between 1976 and 2000; elected as a Republican to the Ninety-fifth Congress by special election, to fill the vacancy caused by the resignation of United States Representative Richard A. Tonry, and reelected to the eleven succeeding Congresses until his resignation on March 1, 1999 (August 27, 1977-March 1, 1999); chairman, Committee on Appropriations (One Hundred Fourth and One Hundred Fifth Congresses). Robert L. Livingston was elected to the United States House of Representatives in a special election in 1977 - the first Republican to represent Louisiana’s First Congressional District in 102 years. He was re-elected to eleven successive two-year terms. He served as a Member of the House Appropriations Committee through most of his time in Congress, and for the maximum period of six years, the House Select Committee on Intelligence. From 1995 through 1998, he served as the Chairman of the House Appropriations Committee. At the start of the 105th Congress in 1997, Mr. Livingston chaired the bi-partisan Ethics Reform Task Force, and in addition to shepherding the 13 Appropriations bills through the legislative process, was responsible for revamping the House Ethics rules. He was chosen by his peers to serve as Speaker-designate for the 106th Congress. Following his departure from Congress in February 1999, Mr. Livingston established a successful lobbying firm known as The Livingston Group in both Washington, DC and in New Orleans, LA. The Livingston Group was recently rated by Influence Magazine as the 9th largest exclusively lobbying shop in the Washington area. Mr. Livingston currently serves on the Board of Directors of Holcim, Inc. (US) and Marine Desalination Systems, Inc., as well as a number of non-profit institutions, including The Medal of Honor Foundation, IFES (International Foundation for Election Systems), and the Shakespeare Theatre of Washington. DC. He is also a member of various Boards of Advisors, both profit and non-profit. Before his almost twenty-two years in Congress, Mr. Livingston practiced law in both public and private fields for nine years. As assistant United States Attorney from 1970-1973, he served as Deputy Chief of the Criminal Division of the U.S. Attorney’s Office, and was honored as outstanding Assistant U.S. Attorney shortly before his departure from the position. His experience also included serving as Chief Special Prosecutor and Chief of the Armed Robbery Division of the New Orleans Parish District Attorney’s Office (1974-1975), and Chief Prosecutor for the Organized Crime Unit of the Louisiana Attorney General’s Office (1975-1976). Mr. Livingston earned a Bachelor of Arts and Juris Doctorate degrees from Tulane University, and is a graduate of the Loyola University Institute of Politics. In 1981, he received an Honorary Doctorate from Our Lady of Holy Cross College in New Orleans, LA, and in 1990, an Honorary Order of the Coif from the Tulane Law School. A Navy veteran, Mr. Livingston served on active duty with the United States Navy as an enlisted man from 1961-1963, and received an honorable discharge from the U.S. Navy Reserve in 1967. 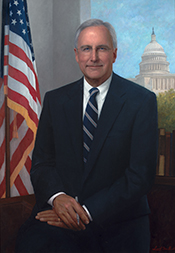