J. Joe Ricketts is recognized as a visionary leader in innovation and services for the individual investor. In 1975, he was a founder of First Omaha Securities, a retail securities brokerage firm in Omaha, Nebraska. Among the first to enter the self-directed securities marketplace, TD AMERITRADE, through the use of innovative technology and marketing, has grown significantly and evolved into an industry leader. Ricketts has served on the board of directors of the Securities Industry Association (SIA) and is a former member of the SIA Regional Firms Committee and Small Firms Committee. He holds a bachelor's degree in economics from Creighton University. Pete Ricketts is the founder of Drakon, LLC, an investment company in Omaha, NE. He is also director and president of the Platte Institute for Economic Research, Inc. and a board member of ZNRG, Inc. In addition to his work on the board, Ricketts previously served the Company for more than 12 years in a number of executive management roles, most recently as the Company's chief operating officer and vice chairman of the board. He also oversaw areas such as strategy and business development, product development and marketing. Prior to joining the Company, Ricketts worked in environmental and economic consulting and worked for Union Pacific Railroad. He is a member of the Omaha board of the Children's Scholarship Fund, a group that provides educational opportunities to low-income children; a board member for Gambling with the Good Life, an anti-gambling coalition; and a member of the advisory board for the Nebraska Coalition for Ethical Research. Ricketts serves on the advisory board for the University of Chicago School of Business and is an advisory board member for the Alumni Capital Network and the Republican Forum. He is also a member of the Trustees for the American Enterprise Institute, the Community Health Charities of Nebraska state board of directors, the Fund for Omaha committee and the Knights of Columbus. Ricketts holds an M.B.A. in marketing and finance from the University of Chicago, where he also earned his bachelor's degree. Thomas S. Ricketts is the chairman and chief executive officer of Incapital LLC, a company he co-founded in 1999. Incapital is a technologically oriented investment bank focused exclusively on the underwriting and distribution of fixed-income products to individual investors. Incapital underwrites for several major U.S. corporations through its InterNotes® product platform. From 1996 to 1999, Ricketts was a vice president and an investment banker for the brokerage division of ABN AMRO. From 1995 to 1996, he was a vice president at Mesirow Financial. From 1988 to 1994, Ricketts was a market maker on the Chicago Board Options Exchange. He holds a bachelor's degree and an MBA from the University of Chicago. Ricketts is the son of J. Joe Ricketts. 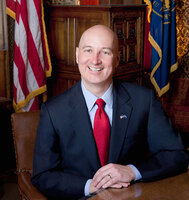