Raymond Pocino was appointed to the Board of Commissioners in June 2002 by Governor McGreevey. For more than 50 years, Mr. Pocino has been a member of the Laborers’ International Union of North America (LIUNA). He was appointed regional manager of LIUNA’s Eastern Region Office in April 1995 and later won election as a LIUNA Vice President in September 1996. He was re-elected to additional five-year terms in 2001 and again in 2006. In his dual positions as Vice President and Eastern Regional Manager, Mr. Pocino directs and oversees activities that affect the working lives of some 40,000 laborers in the New Jersey, Delaware, New York City and Long Island geographical area. He is also President Emeritus of Construction & General Laborers Local 172 in Trenton, NJ. Mr. Pocino is serving his fifth term as a commissioner of the New Jersey Turnpike Authority, one term as chairman. Mr. Pocino also serves as Vice Present of the NJ State AFL-CIO, Vice Chair of Choose New Jersey, and serves as a trustee of both the NJ Alliance for Action and New Jersey SEED. From "How Christie's Men Turned the Port Authority into a Political Piggy Bank." (Bernstein, Andrea. Transportation Nation. 16 Jan. 2014): "Among the interest groups for which the bridge project was hugely important: the construction unions. And one of the Port Authority commissioners voting for it was Raymond Pocino, whose day job is heading the Laborers International Union of North America and who was appointed to the Port board by Governor Jim McGreevey in 2002. "A year after the bridge project got the go-ahead, Pocino (who didn’t return requests for comment) stood next to Christie at the very first rally of the governor's re-election campaign. To rousing cheers, claps and whistles, Pocino called Christie 'our friend, my friend, our choice for governor for the next four years.' It was a big deal for Christie, who wanted to show he could attract labor support." From "Port Authority Commissioner and Laborers International Vice President Ray Pocino Questioned by Feds" (Murphy, Brian Phillips. Medium.com. 30 Jan 2015): "Billing records obtained from the Port Authority earlier today under a Freedom of Information Act request show that Timpone spent a total of 20 hours attending to Pocino’s questioning, which did not take place before the federal grand jury that has been meeting in Newark since early 2014. Reached by phone, Mr. Timpone declined to comment." 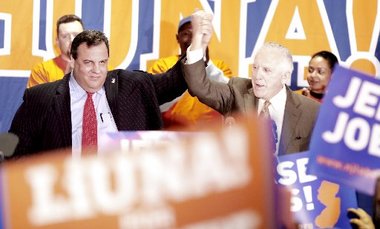