Sheldon Adelson, who rose from selling newspapers on Boston street corners at age 12 to one of the most successful luxury resort developers, philanthropists and political influencers of his generation, died Monday January 11 2021 at his home in Malibu, California. He was 87. Adelson founded and served as chairman and CEO of Las Vegas Sands Corp., the world’s largest gaming corporation, from its inception in 1988. He had been on medical leave from the company since Thursday to resume his fight against non-Hodgkin lymphoma, which he had battled since 2019. Mr. Adelson has been Chairman of the Board, Chief Executive Officer, Treasurer and a director of the Company since August 2004. He has been Chairman of the Board, Chief Executive Officer and a director of Las Vegas Sands, LLC (or its predecessor, Las Vegas Sands, Inc.) since April 1988 when it was formed to own and operate the former Sands Hotel and Casino. Mr. Adelson has extensive experience in the convention, trade show, and tour and travel businesses. Mr. Adelson also has investments in other business enterprises. Mr. Adelson created and developed the COMDEX Trade Shows, including the COMDEX/Fall Trade Show, which was the world's largest computer show in the 1990s, all of which were sold to Softbank Corporation in April 1995. Mr. Adelson also created and developed The Sands Expo and Convention Center, which he grew into one of the largest convention and trade show destinations in the United States before transferring it to us in July 2004. He has been President and Chairman of Interface Group Holding Company, Inc. since the mid-1970s and Chairman of our affiliate, Interface Group-Massachusetts, LLC and its predecessors, since 1990. In 2017, Mr. Adelson broke the record for largest contribution given to a presidential inauguration for Donald Trump's festivities, donating $5 million. Born poor in Boston, Adelson maintains a $5M residence in Newton, Massachusetts. Adelson and his three siblings were raised in a one-room tenement by their parents, Arthur, a cabdriver from Lithuania, and Sarah, a seamstress from Wales. He enrolled at the City College of New York to study business and finance but later dropped out, joined the Army and served in the Korean War. Adelson organized the first tech trade show and called it Comdex, a portmanteau of Computer Dealers Exhibition, in 1979. It was held at the original MGM Grand, where Bally’s now stands, with 167 exhibitors and 3,904 attendees. In its heyday, Comdex was the largest convention Las Vegas had ever seen, with more than 200,000 attendees annually. In 1995, Adelson and his Comdex partners sold the trade show to a Japanese conglomerate for $862 million, of which Adelson’s share was reported to be $500 million. This was money he leveraged to build The Venetian, but he also set his sights overseas. Las Vegas Sands seized the opportunity when Macao, a former Portuguese colony, was returned to the government of mainland China in 1999. Sands Macao opened in 2004. Over the years, Sands has become the market leader in Macao. Forbes recently ranked Adelson as the 38th-richest American, estimating his assets at $35 billion. He owned roughly 57 percent of Las Vegas Sands’ outstanding common stock as of Dec. 31, 2019. In 2016, Sheldon and Miriam Adelson donated $82.5 million to GOP groups. The couple supported Donald Trump and, following his presidential election victory, they also donated $5 million to Trump’s inauguration committee. The Adelsons ranked as the nation’s top political donors in both the 2018 and 2020 elections, according to the Center for Responsive Politics, directing almost $350 million to Republican candidates during those cycles. The Adelsons and Las Vegas Sands also donated $23.2 million for statewide races in 2018. In addition to his wife, Miriam, Sheldon Adelson is survived by three sons, Gary, Adam and Matan Adelson; three daughters, Shelley Adelson, Sivan Dumont (and son-in-law Patrick Dumont) and Yasmin Lukatz ; and 11 grandchildren. 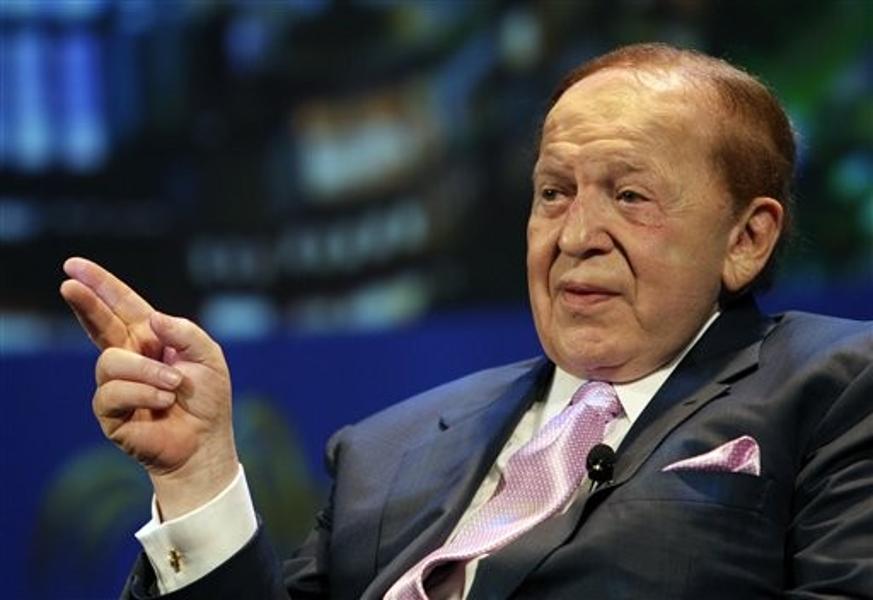