Save Our Country Coalition Co-founder; Founder, Club for Growth; Heritage Foundation fellow; Nominated by Trump for Fed Board position

Trumponomics co-author and longtime CNN contributor. President Donald Trump nominated former campaign adviser Stephen Moore to fill one of the two open seats on the Federal Reserve Board. Stephen Moore, who formerly wrote on the economy and public policy for The Wall Street Journal, is the Distinguished Visiting Fellow, Project for Economic Growth, at The Heritage Foundation. Moore, who also was a member of The Journal’s editorial board, returned to Heritage in January 2014 -- about 25 years after his tenure as the leading conservative think tank’s Grover M. Hermann Fellow in Budgetary Affairs from 1984 to 1987. Stephen Moore joined The Wall Street Journal as a member of the editorial board and senior economics writer on May 31, 2005. He splits his time between Washington and New York, focusing on economic issues, including budget, tax and monetary policy. Stephen has been a frequent contributor to the Journal over the years, and is previously known as the founder and former president of the Club for Growth, which raises money for political candidates who favor free-market economic policies. He left that position in 2004. Just prior to coming to the Journal, Stephen was president of a new organization, the Free Enterprise Fund. Over the years Stephen has served as a senior economist on the Congressional Joint Economic Committee, as a budget expert for the Heritage Foundation and as a senior economics fellow at the Cato Institute, where he published dozens of studies on federal and state tax and budget policy. He was a consultant to the National Economic Commission in l987, and research director for President Reagan's Commission on Privatization. Stephen is the author of five books, most recently, "Bullish on Bush: How the Ownership Society Is Making America Richer." He graduated from the University of Illinois and holds a masters degree in economics from George Mason University. 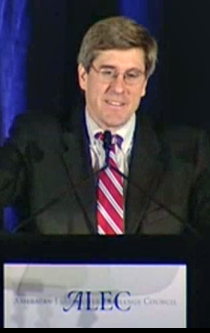