Mr. Ryan is President & Chief Executive Officer of the Securities Industry and Financial Markets Association (SIFMA). SIFMA is the leading trade association representing 680 global financial markets participants. SIFMA operates from New York, Washington DC, London and Hong Kong with approximately 200 employees. It brings together financial industry experts from banks, broker/dealers, institutional investors, and retail private clients. The association develops industry positions through over 100 product/sector committees. It then advocates these positions to regulators, legislators, courts, multinational governmental organizations and the media. The association conducts over 60 educational conferences a year. Prior to joining SIFMA, Mr. Ryan was Vice Chairman, Financial Institutions and Governments, at J.P. Morgan where he was a member of the firm’s senior leadership. Mr. Ryan is a director of Lloyds Banking Group, Lloyds TSB Bank plc, HBOS plc, Bank of Scotland plc, Putnam Investments, LLC, Great-West Life & Annuity Insurance Company and The U.S.-Japan Foundation. He is also a private sector member of the Global Markets Advisory Committee for the National Intelligence Council (NIC). From 2002 to 2004, Mr. Ryan was a member of the US-Japan Private Sector/Government Commission with responsibility for Corporate Restructuring and NPL workout. Mr. Ryan also served from 2000 to 2004 as a Board Member and Chairman of the Audit Committee at Koram Bank in Seoul, Korea. Prior to joining J.P. Morgan in 1993, Mr. Ryan was the Director of the Office of Thrift Supervision, U.S. Department of the Treasury. As OTS Director, Mr. Ryan was principal manager of the savings and loan cleanup which involved closing approximately 700 insolvent institutions, improving capital bases and selling over $300 billion of assets. Mr. Ryan was a Director of the Resolution Trust Corporation and a Director of the Federal Deposit Insurance Corporation. From 1983 to 1990, Mr. Ryan was a Partner in the Washington, D.C. office of the law firm Reed, Smith, Shaw & McClay, where he headed the Pension Investment Group and was a member of the firm's Executive Committee. From 1981 to 1983 Mr. Ryan was Solicitor of Labor, U.S. Department of Labor. Mr. Ryan is a graduate of Villanova University and American University Law School. He served as an officer in the U.S. Army from 1967 – 1970. 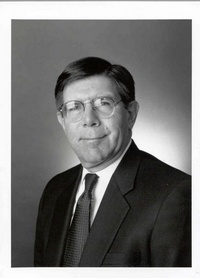