Chairman of the NYSE

Jeff Sprecher is Founder, Chairman and CEO of Intercontinental Exchange, Inc. (NYSE: ICE) and Chairman of the New York Stock Exchange. Intercontinental Exchange is a Fortune 500 company. ICE was formed in 2000 and he has served as the Chief Executive Officer since May 2000 and as Chairman of the Board since November 2002. Sprecher acquired Continental Power Exchange (CPEX), the predecessor company to ICE, in 1997 to achieve his vision of an open, transparent electronic energy marketplace. Under his leadership, ICE has evolved from operating an energy market to a network of exchanges, including the New York Stock Exchange, clearing houses and information services customers rely upon to invest, trade and manage risk across global financial and commodity markets. ICE Data Services is a leader in serving the information and connectivity needs across financial markets. As the parent company of the New York Stock Exchange, the company helps raise more capital than any other exchange in the world, driving economic growth and transforming markets. ICE completed its initial public offering in 2005 on the NYSE and today has a market capitalization over $40 billion. Sprecher has led numerous acquisitions, including the International Petroleum Exchange of London (2001), the New York Board of Trade (2007), Creditex (2008), The Clearing Corporation (2009), the Climate Exchange (2010), NYSE Euronext (November 2013), Singapore Mercantile Exchange (2014), Interactive Data Corporation (2015), NGX (2017), BondPoint (2018), TMC (2018), Chicago Stock Exchange (2018) and MERSCORP Holdings, Inc. (2018). He previously served as Chairman of the Metro Atlanta Chamber and currently serves on the Executive Committee; is a Wisconsin Alumni Research Foundation Trustee; and is on the Board of Directors for the Buckhead Coalition, The Commerce Club and Atlanta Committee for Progress. Sprecher previously served as President of Western Power Group, Inc., a developer, owner and operator of large central-station power plants in California. Raised in Wisconsin, Sprecher earned a Bachelor of Science degree in Chemical Engineering from the University of Wisconsin at Madison and a Master of Business Administration from Pepperdine University in Malibu, California. 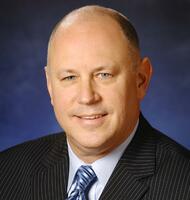