Former Chairman and CEO of PNC

James E. Rohr is the former chairman and CEO of PNC Financial Services Group, having retired from those positions in 2014 and 2013, respectively. During his more than decade-long leadership, Mr. Rohr grew PNC from a Pennsylvania bank into one of the country’s largest financial institutions. Under his management, PNC developed new consumer banking products and specialized services for firms and government entities. The company also made a series of acquisitions of other financial institutions, including National City Bank. Mr. Rohr’s community service has included leadership roles in civic, cultural and educational organizations. He is a past chairman of the Allegheny Conference on Community Development and of The Pittsburgh Cultural Trust, which was created through Endowments funding and the leadership of Heinz family members. In addition, he served as co-chair, along with then-Pennsylvania Gov. Ed Rendell, of the leadership council that governed Pre-K Counts, a statewide network of early childhood education systems that evolved from the Endowments’ work in that field. Mr. Rohr also initiated a similar multi-state system of early childhood support services through PNC’s $100 million Grow Up Great initiative. His other nonprofit leadership positions include board membership on the Greater Pittsburgh Council of the Boy Scouts of America, where he also served as chairman. He is on the boards of Carnegie Mellon University, the Committee Encouraging Corporate Philanthropy and the University of Pittsburgh's McGowan Institute for Regenerative Medicine. Mr. Rohr has been recognized for his volunteer service with the Woodrow Wilson Award for Corporate Citizenship, the Sesame Workshop Corporate Honoree Award and the Hero Award of the Women's Institute for a Secure Retirement presented by the Heinz Family Philanthropies. 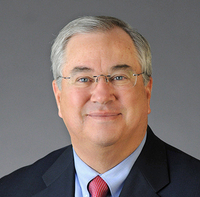