Jeff Bezos' Amazon.com is the world's largest internet retailer of any kind, reporting more than $61 billion in 2012 sales, up $13 billion from the previous year. A 40% surge in the price of the company's stock added $6.8 billion to Bezos' net worth over the past year. The Seattle company continues to separate from the pack on service and speed, adding 20 new shipment hubs in 2012. It just announced the coming launch of Amazon Coins in May 2013, a virtual currency that can be used to buy Kindle Fire content. Bezos also continues to invest in side projects that fuel his adventurous side. In March 2012, Bezos Expeditions discovered the lost engines from the Apollo 11 lunar mission on the ocean floor, and is planning an attempt to bring them to the surface. Bezos also funnels money into aerospace firm Blue Origin, a West Texas-based research and development outfit working to create a vertical take-off and landing rocket. In the meantime, he's looking to add robots to his workforce: in March 2012, Amazon bought robotics firm Kiva Systems for $775 million in hopes of speeding up its order fulfillment process. While Bezos and wife Mackenzie are notoriously private, they made headlines in July 2012 for a rare public donation: $2.5 million to Washington United for Marriage, a group backing Referendum 74, which would legalize same-sex marriage in the couple's home state. Princeton grad Bezos once worked at hedge fund D.E. Shaw; he quit Wall Street before his 30th birthday to sell books online from his Seattle garage. He founded Amazon.com in 1994 and took it public three years later. Amazon didn't turn a profit until late 2001. 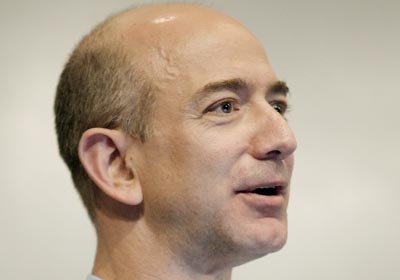