A Representative from Michigan; born in Detroit, Wayne County, Mich., May 16, 1929; attended Detroit public schools; B.A., Wayne State University, Detroit, Mich., 1957; LL.B., Wayne State Law School, Detroit, Mich., 1958; lawyer, private practice; National Guard, 1948-1950; United States Army, 1950-1954; United States Army Reserves, 1954-1957; staff, United States Representative John D. Dingell, Jr., of Michigan, 1958-1961; general counsel for three labor locals in Detroit, 1959-1964; executive board member, Detroit, Mich., American Civil Liberties Union, 1964 to present; executive board member, Detroit, Mich., NAACP, 1963 to present; referee for Michigan workmens compensation department, 1961-1963; elected as a Democrat to the Eighty-ninth and to the twenty-four succeeding Congresses (January 3, 1965-present); one of the managers appointed by the House of Representatives in 1988 to conduct the impeachment proceedings against Alcee Lamar Hastings, judge of the United States District Court for the Southern District of Florida; chair, Committee on Government Operations (One Hundred First through One Hundred Third Congresses); chair, Commitee on the Judiciary (One Hundred Tenth and One Hundred Eleventh Congresses). Representative John Conyers Jr., an advocate of liberal causes for five decades and the longest-serving African-American in the history of Congress, died on Sunday October 27 2019 at his home in Detroit. He was 90. Mr. Conyers, a Democrat, resigned in 2017 after accusations of unwelcome sexual advances by two women. both Paul Ryan, a Republican and then the speaker of the House, and Nancy Pelosi, the House Democratic leader at the time and the current speaker, found the complaints credible and demanded that he step down. John James Conyers Jr. was born in Detroit on May 16, 1929, a son of John and Lucille (Simpson) Conyers. His father was an executive of the United Auto Workers. He enlisted in the Army in 1950, served in Korea as a second lieutenant and was discharged in 1954. He returned to Wayne State, earning a bachelor’s degree in 1957 and a law degree in 1958. From 1958 to 1961 he worked as a legislative aide to Representative John D. Dingell Jr. Mr. Conyers, at the age of 61, married Monica Esters, a 25-year-old former staff member, in 1990. He is survived by his wife and two sons, John and Carl. 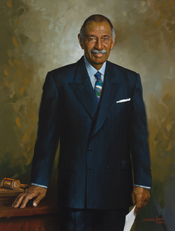