(son of George Atlee Goodling), a Representative from Pennsylvania; born in Loganville, York County, Pa., December 5, 1927; graduated from William Penn High School, York, Pa., 1945; B.S., University of Maryland, 1953; M.Ed., Western Maryland College, 1957; doctoral studies at the Pennsylvania State University, 1958-1963; held various teaching and administrative positions throughout the State of Pennsylvania; served in the United States Army, 1946-1948; elected as a Republican to the Ninety-fourth and to the twelve succeeding Congresses (January 3, 1975-January 3, 2001); chairman, Committee on Economic and Educational Opportunities (One Hundred Fourth Congress); chairman, Committee on Education and the Workforce (One Hundred Fifth and One Hundred Sixth Congresses); was not a candidate for reelection to the One Hundred Seventh Congress. 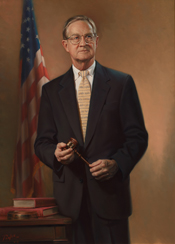