Lawrence J. Ellison has been Chief Executive Officer and a Director since he founded Oracle in June 1977. He served as Chairman of the Board from May 1995 to January 2004 and was a member of the Executive Committee from December 1985 to July 2008, when the Committee was eliminated. In the past year, Larry Ellison, America's third richest man, has been on a real estate buying spree. In June, he bought 98% of the Hawaiian island of Lanai from David Murdock. That purchase, for a reported $500 million or more, gave Ellison almost all of the 141-square mile island, including two resort hotels and a housing development. Adding to his real estate purchases, Ellison has also been active in the Los Angeles mansion market, purchasing two Malibu homes in October and January for a combined $55 million. Ellison can afford all of it, too. As of February, his shares of Oracle are up more than 20% year-over-year. Most recently, Ellison, long an admirer of NBA basketball franchises, was rumored to be exploring a deal to purchase the Sacramento Kings to prevent them from moving to Seattle. Ellison's other passion, yachting, will make its way into San Francisco this year as the 2013 America's Cup race lands in the city. Ellison, who signed on to the Gates-Buffett Giving Pledge in 2010, has thus far donated $445 million, mostly via Oracle stock, to his Ellison Medical Foundation, which supports research on aging and age-related diseases. His latest gift to the foundation was 1.6 million shares of Oracle--worth $45 million--in April 2012. 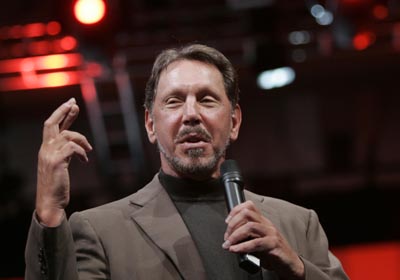