Mr. Davis, a partner in the Washington, D.C. office, is a member of the Litigation Group. Mr. Davis advises clients on a wide range of legal and governmental issues. He concentrates his practice in civil litigation, with particular focus on securities fraud and accounting irregularities cases, antitrust, government contracts and commercial litigation, and legal crisis management and strategic communications. In June 2005, President Bush appointed Mr. Davis to serve on the five-member Privacy and Civil Liberties Oversight Board, created by the U.S. Congress as part of the 2005 Intelligence Reform Act. From 1996 to 1998, Mr. Davis served as Special Counsel to the President in the White House and was spokesperson for the President on matters concerning the campaign finance investigations and other legal issues. Drawing upon this experience, since his return to private practice, Mr. Davis provides counseling to corporations and government contractors on crisis management issues by developing press strategies for entities exposed to high-profile litigation and regulatory matters, particularly in high-tech/securities fraud cases and other legal issues where media coverage can affect legal outcomes and commercial reputational injuries. Mr. Davis has participated in national, state and local politics for almost 30 years. He has served three terms (1980-1992) on the Democratic National Committee representing the State of Maryland, and during that period he served on the DNC Executive Committee and as Chairman of the Eastern Region Caucus. In Montgomery County, Maryland, he served as Chairman of the Washington Suburban Transit Commission. Between 1990 and 1996, Mr. Davis was a bi-monthly commentator on Maryland politics for WAMU-88.5/FM, a Washington D.C. local affiliate of National Public Radio. He has been a regular television commentator and has been a political and legal analyst for MSNBC, CNN, Fox Cable, CNBC and network TV news programs. He has published numerous op-ed/analysis pieces in the New York Times, the Wall Street Journal, the Washington Post and other national publications. Mr. Davis came to Washington, D.C. in 1970 after graduating from Yale Law School where he won the prestigious Thurmon Arnold Moot Court prize and served on the Yale Law Journal. A graduate of Yale College, Mr. Davis served as Chairman of the Yale Daily News. 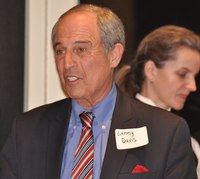