Ukrainian gas middleman; indicted in US bribery case in 2014

Firtash, who has links to Russian President Vladimir Putin's Kremlin, has been fighting extradition from Vienna since 2014. Accused of masterminding an international titanium mining racket involving Chicago-based Boeing, he wants U.S. District Judge Rebecca Pallmeyer to throw out his case before Austrian authorities put him on a plane to Chicago. His lawyer, former U.S. Attorney Dan Webb, on Friday said Firtash's long battle in the Austrian courts should wrap up "within two to four months," an apparent downgrade from the "great risk" of imminent extradition he had previously warned of. Webb said Firtash preferred to remain in Austria while the case is being argued because he couldn't run his business if he were "in shackles in the MCC" — a reference to the Metropolitan Correctional Center in downtown Chicago. 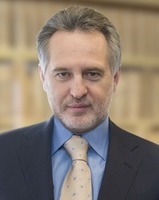