David Tepper initially became interested in the stock market as a young boy watching his father trade stocks in his hometown of Pittsburgh. Today, as president and founder of Appaloosa Management, Tepper has earned an international reputation for producing some of the highest returns amongst fund managers on Wall Street. One expert has referred to him as "the best trader in his space." Tepper, age 46, was raised in the East End of Pittsburgh in the city section known as Stanton Heights. He graduated from Peabody Senior High School in 1975 and attended the University of Pittsburgh, earning a bachelor of arts with honors in Economics in 1978. Upon graduation, Tepper became a credit and securities analyst at Equibank in Pittsburgh. In 1980, he enrolled in graduate school at Carnegie Mellon University’s Business School. After earning his MBA in 1982, Tepper accepted a position in the treasury department of Republic Steel in Ohio. In 1984, he was recruited to Keystone Mutual Funds (now part of Evergreen Funds) in Boston, and in 1985, Tepper was recruited by Goldman Sachs, which was forming its high yield group. He joined the firm in New York City as a credit analyst. Within six months, Tepper became the head trader on the high-yield desk at Goldman where he worked for eight years. His primary focus was bankruptcies and special situations. He left Goldman in December 1992 and started Appaloosa Management in early 1993. Appaloosa Management is a $3 billion hedge fund investment firm based in Chatham, N.J., just west of New York City. Founded with Jack Walton, a former senior portfolio manager for Goldman Sachs Asset Management, the firm is a general partner of Appaloosa Investment Limited Partnership I and invests in debt and equity securities on behalf of individuals, foundations, universities and other organizations. Appaloosa Management also advises Palomino Fund, Ltd. Tepper and his wife Marlene are the parents of three children. His personal interests include coaching his children’s baseball, softball and soccer teams. Tepper currently serves as a member of the Business Board of Advisors for the Tepper School of Business at Carnegie Mellon and serves on various boards and committees for charitable and community organizations in New York and New Jersey. Former junk bond guru at goldman Sachs mired in drawn-out dispute with auto parts maker Delphi. Pittsburgh native "never got an A in high school." Attended Carnegie Mellon business school (renamed Tepper School of Business following $55 million donation). Left Goldman after failing to make partner. Founded Appaloosa Management 1992. Fund up 150% in 2003; down 17% in first quarter of 2008. Today manages $5.5 billion in assets. 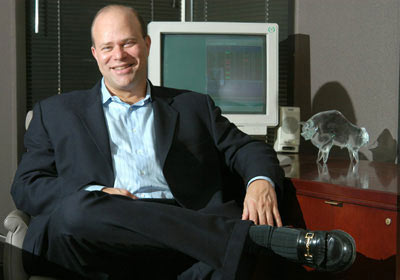