Steven Mark Levy graduated from Connecticut College as President of the class of 1977 with a Bachelor of Arts degree, majoring in the Enlightenment and the American Founding. He immediately entered the real estate business, first as a leasing salesman at Julien J. Studley, and then as a sales broker at William A. White & Sons. He sold 461 Eighth Avenue which was renamed 5 Penn Plaza. Steven is a recipient of the Real Estate Board of New York's "Most Ingenious Deal" award for the sale of 1560 Broadway which allowed the Actors' Equity Union to remain in the heart of the Theater District, rather than needing to move to New Jersey. In 1986, he joined his father, Stanley and built a family office. In 1987, he sold the old Seigel Cooper Department Store at 620 Sixth Avenue to Tishman Speyer Properties. Since then, he has managed and leased the family's real estate interests, as well as the broader spectrum of investments. His community involvement includes New York charities and national political activities. Steven has been active at UJA-Federation of Jewish Philanthropies of New York since 1978. He served on Young Men's Leadership Cabinet and is a past President and Chairman of the Henry Kaufmann Campgrounds, which serves over 6,000 New York City and Long Island campers each day during the summer. He is also past President and Chairman of the Greenwich Jewish Federation in Connecticut. Steven was appointed to the United States Holocaust Memorial Council by President George W. Bush and currently serves as Chairman of the Middle East Forum. 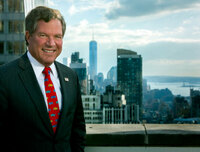