A Representative from Florida; born in Brooksville, Hernando County, Fla., July 12, 1944; graduated from Hernando High School, Brookville, Fla., 1962; B.A., University of Florida, Gainesville, Fla., 1966; J.D., University of Florida, Gainesville, 1968; United States Navy, Judge Advocate General Corps, commander, 1969-1972; United States Naval Reserve, 1972-1992; admitted to the Florida bar in 1968; lawyer, private practice; chairman, Republican Executive Committee of Seminole County, 1976-1980; county chairmens representative, Florida State Executive Committee for Fifth District, 1976-1980; delegate, Republican National Convention, 1984, 1988, 1992, 1996, and 2000; elected as a Republican to the Ninety-seventh and to the nine succeeding Congresses (January 3, 1981-January 3, 2001); one of the managers appointed by the House of Representatives in 1998 to conduct the impeachment proceedings of President William Jefferson Clinton; was not a candidate for reelection to the United States House of Representatives, but was an unsuccessful candidate for the United States Senate in 2000 and 2004. Bill McCollum was profiled in the December 15 edition of the Florida Bar News, the Florida Bar’s statewide source for news on law related issues. According to the article, McCollum, who had a successful 20-year congressional career prior to joining Baker Hostetler, said he was not interested in seeking public office again until he had a conversation in the late summer of 2005 with George LeMieux, the top deputy for outgoing Attorney General and Gov.-elect Charlie Crist. 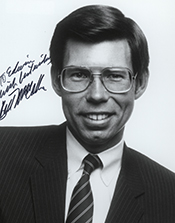