Congressman Lynn A. Westmoreland served in the U.S. House of Representatives for 12 years after serving 12 years in the Georgia House of Representatives. During his time in Congress, he served on the subcommittee on railroads, pipelines, and hazardous materials of the House Transportation and Infrastructure Committee for six years. Congressman Westmoreland also served on the Financial Services Committee and the House Permanent Select Committee on Intelligence. Congressman Westmoreland started his own construction business in 1982 and did residential and light commercial construction until his election to Congress in 2004. He currently serves as principal of Westmoreland Strategies LLC, which provides strategic advice to a variety of clients. He and his wife of 48 years, Joan, have three children and seven, soon to be eight, grandchildren. Representative from Georgia; born in Atlanta, Fulton County, Ga., April 2, 1950; graduated from Therrell High School, Atlanta, Ga., 1968; attended Georgia State University, Atlanta, Ga., 1969-1971; real estate developer; member of the Georgia state house of representatives, 1993-2004, and minority leader, 2000-2004; elected as a Republican to the One Hundred Ninth and to the five succeeding Congresses (January 3, 2005-January 3, 2017); was not a candidate for reelection to the One Hundredth Fifteenth Congress in 2016. 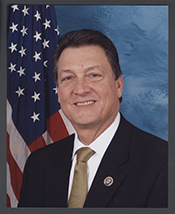