Ken Salazar has served as U.S. Secretary of the Interior, Colorado U.S. Senator, and Colorado Attorney General. In 1998, Salazar was elected as Colorado Attorney General and became the first Latino ever elected to statewide office in Colorado. He was reelected as Attorney General in 2002. In 2004, Salazar was elected to the U.S. Senate for Colorado becoming the first Latino democrat to be elected to the United States Senate since 1972. During the Obama Administration, he served as Secretary of the Interior, where he had a lead role on energy and climate, and the nation’s conservation agenda. A native of Colorado, Salazar is a fifth-generation rancher in Colorado’s San Luis Valley. He is a partner at WilmerHale, an American law firm and the founder of the firm’s Denver office. Salazar represents clients on energy, environment, natural resources and Native American matters. Salazar has a B.S. from Colorado College and a J.D. from the University of Michigan. His native language is Spanish. (brother of John Salazar), a Senator from Colorado; born in Alamosa, Colorado, March 2, 1955; B.A., political science, Colorado College, Colorado Springs, Colo., 1977; J.D., University of Michigan Law School, Ann Arbor, Mich., 1981; practiced law in Denver, Colo., 1981-1986, 1994-1998; chief legal counsel, Governor Roy Romer of Colorado, 1986-1990; executive director, Colorado Department of Natural Resources 1990-1994; Colorado State attorney general 1999-2005; elected as a Democrat to the U.S. Senate in 2004, and served from January 3, 2005, until his resignation on January 20, 2009, to accept a Cabinet position; Secretary of the Interior in the Cabinet of President Barack Obama, 2009-. 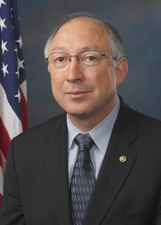