Former Republican US Senator from Indiana

A Senator from Indiana; born in Indianapolis, Marion County, Ind., April 4, 1932; attended the public schools of Indianapolis; graduated, Denison University, Granville, Ohio 1954; attended Pembroke College, Oxford, England, as a Rhodes Scholar and received a graduate degree in 1956; businessman, involved in the manufacturing of food production equipment, livestock and grain operations; United States Navy 1957-1960; member, Indianapolis Board of School Commissioners 1964-1967; mayor, Indianapolis 1968-1975; unsuccessful Republican candidate for the United States Senate in 1974; elected as a Republican to the United States Senate in 1976 and reelected in 1982, 1988, 1994, 2000, and again in 2006 for the term ending January 3, 2013; chair, Republican Senatorial Campaign Committee (Ninety-eighth Congress), Committee on Foreign Relations (Ninety-ninth Congress, One Hundred Eighth and One Hundred Ninth Congresses), Committee on Agriculture, Nutrition and Forestry (One Hundred Fourth through One Hundred Sixth Congresses, One Hundred Seventh Congress [January 20-June 6, 2001]). Richard Green Lugar was born in Indianapolis on April 4, 1932, to a farming family with generations of roots in Indiana. His early life and career were marked by the most traditional signposts of American success. He was an Eagle Scout and president of both his Shortridge High School and Denison University senior classes. He got along so well with his college co-president, Charlene “Char” Smeltzer, that they married after graduating. He then became a Rhodes Scholar, and during his studies at Oxford, he visited the American embassy in London in 1957 to enlist in the Navy. Besides his wife, Mr. Lugar’s survivors include four sons, Mark, Robert, John and David; a sister, Anne (Lugar) Johnson; 13 grandchildren, and 17 great-grandchildren. 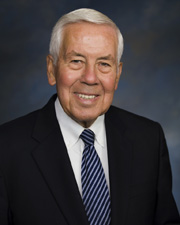