Bruce M. Ramer was reappointed by President Barack Obama and confirmed by the Senate in August 2013. This is Mr. Ramer's second term as a member of the CPB Board of Directors, having been previously appointed for his first term by President George W. Bush. He was elected vice chair in September 2016 and re-elected in October 2017. He served as chair of the CPB Board of Directors from 2010 to 2012. He is an attorney and partner at Gang, Tyre, Ramer & Brown, a firm specializing in entertainment and media matters. Ramer has been active in public television since joining the board of KCET in Los Angeles in 1992. He served as chair from 2001 to 2003. He is a member of the Board of Trustees of the University of Southern California (USC). He is chair of the USC Institute on Entertainment Law and Business and a member of the Board of Councilors of the USC Annenberg School for Communication and Journalism, Board of Governors of the Center for the Digital Future at USC Annenberg; member of the Board of Councilors of the USC Gould School of Law and the USC Shoah Foundation Institute for Visual History and Education. Ramer is founding chairman and member of the Board of Trustees of the Geffen Playhouse, a board member of the Southern California Committee for the Olympic Games, the Los Angeles Sports Council, the National Archives Foundation, and chairman of the Peabody Advisory Board. He is also a member of the Council on Foreign Relations and the Pacific Council on International Policy. He is a former member of the Herrhausen Institute for International Dialogue of Deutsche Bank. Ramer is a graduate of Princeton University and Harvard Law School. He lives in Los Angeles with his wife, Madeline. They have four children and six grandchildren. 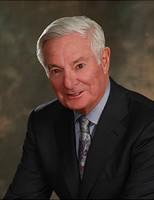