The United States Chamber of Commerce (USCC) is a business-oriented American lobbying group. Politically, the Chamber usually supports Republican political candidates, though it has occasionally supported conservative Democrats. Yet, its direct support to candidates and candidates campaigns represents but a tiny percentage of the money the Chamber spends on lobbying. It is the largest lobbying group in the USA, spending more money than any other lobbying organization on a yearly basis (e.g. averaging over $100M per year between 2009 and 2018)! 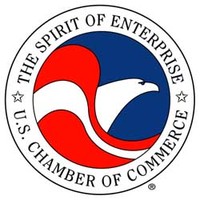