Representative from Florida; born in Nashville, Davidson County, Tennessee, on October 10, 1965; B.S., Troy State University, Troy, Ala., 1987; A.A., Jefferson State Community College, Birmingham, Ala., 1989; mortician; business owner; elected as a Republican to the One Hundred Twelfth and to the succeeding Congress (January 3, 2011-January 3, 2015); unsuccessful candidate for reelection to the One Hundred Fourteenth Congress in 2014. 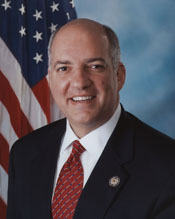