Daughter of John A Catsimatidis

Andrea Catsimatidis serves as an executive of the Red Apple Group. In addition to contributing to the leadership of the company as a whole, she has specific responsibilities as a Principal of Red Apple Real Estate, a member of Red Apple Group’s investment committee, Vice President of First Federal Guarantee Insurance Company, and Managing Director of Gristedes Supermarkets. Andrea’s leadership is not solely confined to the private sector; she also has public leadership roles and strives to make a positive social impact. In September 2017, she was elected Chair of the Manhattan Republican Party and is working to build the Republican Party in New York City. Andrea also serves on the board of the DoughMain Education Foundation to promote children’s financial literacy and is actively involved in other charities including the Police Athletic League and the Alzheimer’s Association. Andrea graduated from New York University’s Stern School of Business with a B.S. in Business Management and double minors in Political Science and Communications. 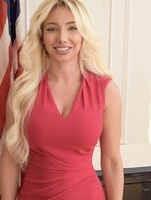