Even while presiding over Bank of America in the 1970s, when it was the nation’s largest bank, Clausen regularly spoke publicly about the needs of developing countries, according to a 1980 New York Times profile. That focus paid dividends when President Jimmy Carter nominated him in 1980 to succeed Robert McNamara as president of the World Bank. During Clausen’s five-year term, from July 1981 to June 1986, the World Bank struggled to help developing nations endure one of the worst recessions since World War II. It also had to respond to a shift in U.S. political attitudes under President Ronald Reagan. Alden Winship Clausen was born on Feb. 17, 1923, in Hamilton, Illinois, the son of Morton Clausen, publisher of the town’s weekly newspaper, and the former Elsie Kroll. He graduated from Carthage College in Kenosha, Wisconsin, in 1944 and joined the U.S. Army Air Corps, serving as a meteorological officer. After the war he obtained his law degree from the University of Minnesota. 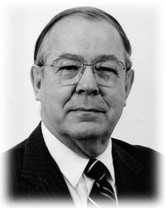