Boeing on Monday December 23 2019 fired its chief executive, Dennis A. Muilenburg, whose handling of the company’s 737 Max crisis had angered lawmakers, airlines, regulators and victims’ families. The company has been mired in the worst crisis in its 103-year history since the crashes of two 737 Max jets killed 346 people. The plane has been grounded since March, and Boeing has faced cascading delays as it tries to return the Max to the air.Dennis Muilenburg is president and chief executive officer of The Boeing Company. He has served as a director of the Boeing board since 2015. Muilenburg, 55, oversees the strategic direction of the Chicago-based, $101.1 billion aerospace company. With roughly 150,000 employees across the United States and in more than 65 countries, Boeing is the world’s largest aerospace company and top U.S. exporter. It is the leading manufacturer of commercial airplanes, military aircraft, and space and security systems, and a provider of global services; it supports airlines and U.S. and allied government customers in more than 150 nations. Muilenburg became chief executive officer in July 2015 and president in December 2013. He served as chairman of the board from March 2016 to October 2019. Until July 2015, Muilenburg served as vice chairman, president and chief operating officer of Boeing, where he supported the company’s aerospace business operations and focused on specific growth enablers, including important global relationships, leadership initiatives and development program performance. Before that, Muilenburg served as president and chief executive officer of Boeing Defense, Space & Security (BDS). Earlier, Muilenburg was president of BDS’s Global Services & Support business, vice president and general manager of the Boeing Combat Systems division, and program manager for Future Combat Systems. Prior to that, he served as vice president of Programs & Engineering for Boeing Air Traffic Management and director of Weapon Systems for the proposed Boeing Joint Strike Fighter aircraft. He also held program management and engineering positions on F-22, Airborne Laser, High Speed Civil Transport and the Condor reconnaissance aircraft, among others. Muilenburg, who joined Boeing in 1985, spent the first 15 years of his career in the Puget Sound region of Washington, where he held a number of program management and engineering positions in support of both the commercial airplanes and defense businesses. Muilenburg is a member of the board of directors of Caterpillar Inc., the U.S.-China Business Council, the Congressional Medal of Honor Foundation, Northwestern University and FIRST (For Inspiration and Recognition of Science & Technology). He is past chairman of the Aerospace Industries Association (AIA) board of governors and a current AIA executive committee member. He is a board of directors member of Business Roundtable, an association of chief executive officers of leading U.S. companies. Appointed by the administrator of the National Aeronautics and Space Administration, he serves on the National Space Council’s Users Advisory Group. He also serves on the board of trustees for the National World War II Museum. He is an honorary fellow of the American Institute of Aeronautics and Astronautics (AIAA), a fellow of the Royal Aeronautical Society and a member of the National Academy of Engineering (NAE). A native of Iowa, Muilenburg holds a bachelor's degree in aerospace engineering and an honorary doctor of science degree from Iowa State University as well as a master's degree in aeronautics and astronautics from the University of Washington. 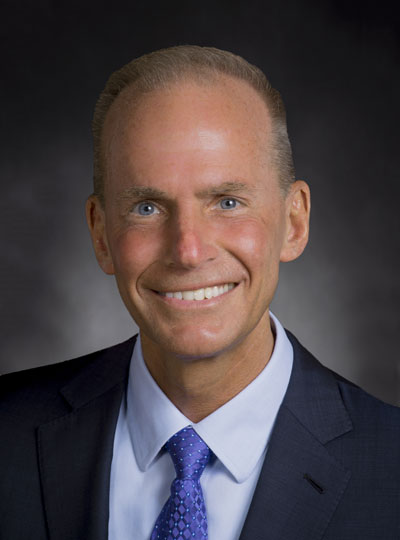